For the past decade, Apple has dominated the tech market with their sleek, stylish devices, leaving their competitors in the dust. But after years of living in Apple’s shadow, Microsoft is ready to step into the spotlight, bringing us innovative tech that outshines everything Apple has to offer. 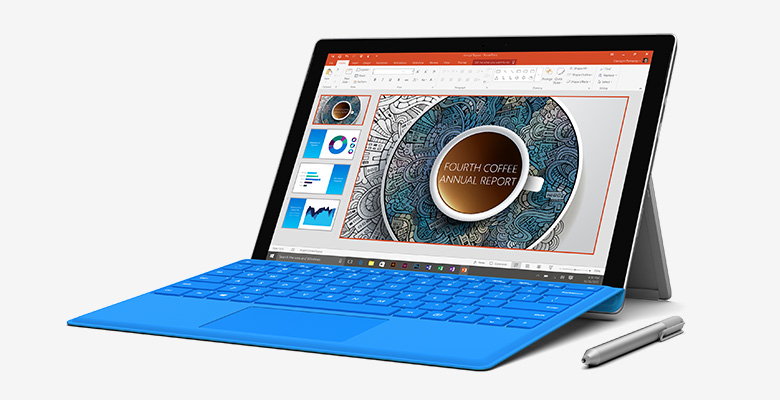 Microsoft loves to boast about the Surface Pro 4, saying that it has all the power of a laptop with the convenience and mobility of a tablet, and can you really fault them for it?

Equipped with an Intel Skylake processor, the Surface Pro 4 is 30% faster than its previous incarnation, and 50% faster than the Macbook Air. To quote Panos Panay, Microsoft’s vice president of Surface Computing, “Nothing even comes close.”

This incredible machine actually runs full Windows 10, so users “don’t have to settle for watered-down versions of image and video editing suites, lightweight word processors, and mobile browsers,” says tech writer Killian Bell. “And even when you run desktop apps, you’re going to get great performance, because Surface Pro 4 has… up to 16GB of RAM, and up to 1TB of internal storage.”

But but it’s the upgraded pen that gets artists to take notice.

“The resistance offered by the new nib is just right…the pen eraser feels exactly like a rubber eraser.” says Rick Rodrigues of surfaceproartist.com. “As you press down harder on the screen, you receive tactile feedback as your stroke thickens.”

Capable of 1024 levels of pressure sensitivity, the Surface Pro 4’s pen comes in four colors, has interchangeable nibs that capture the feel of four essential artist’s pencils: HB, B, H, and 2H. The most exciting feature is the tail eraser, something Apple’s new stylus conspicuously lacks, especially since it’s called a ‘pencil.’ The eraser is one of three buttons included on the pen, along with a right-click button, and a dedicated one click to OneNote button.

Microsoft hits us even harder with the unparalleled Surface Book. As the ultimate hybrid device, Microsoft’s first laptop has a detachable display lets you rotate and detach the screen to use as a tablet. David Pierce of wired.com calls it “easily the most compelling device the company has ever made.”

It’s all made possible by the otherworldly dynamic fulcrum hinge. Four rotational points roll out like a carpet as the laptop opens, extending the base by up to 20 millimeters. This gives the device balance while allowing it to remain thin and light. 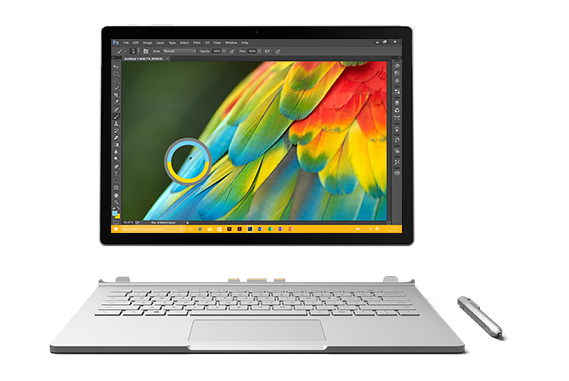 Unlike other convertible laptops, the Surface Book cannot simply be pulled apart. The muscle wire lock keeps the screen and keyboard together through all the hinge’s twists and turns until you’re ready to detach the device. Then, with the press of a button, a collection of Nitinol springs release the display with a satisfying click. And that click? Software generated. The lock is actually silent, but the Microsoft’s engineers realized that an auditory confirmation is necessary for users to handle the device “without hesitation.”

Underneath the laptop’s silver magnesium casing is a lightning fast Intel Core i7 processor 50% faster than the MacBook Pro, a battery that lasts up to 12 hours, and a 13.5 inch PixelSense™ display with crystal-clear resolution at 267 PPI. That’s 6 million delicious pixels as far as the eye can see. It’s also the first product ever to feature multiple graphics processing units.

“It’s never been done before,” says Panay. “This product is the first ever where the GPU is in the base and then a second GPU is in the top.”

Keeping it all secure is Windows Hello. This remarkable program uses the Intel RealSense 3D camera to scan your face and iris, logging you into your computer completely password-free.

The Surface Book has hit the scene like an atom bomb. The most expensive model is already out of stock on Microsoft’s online store, although there is limited availability through Microsoft’s educational resellers. It’s clear that the Surface Pro 4 and the Surface Book are the one-two punch Microsoft needs to knock Apple out of the ring.